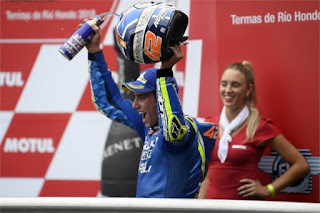 SPEEDCORNER.NET – Alex Rins is one of the new sensations of the season . The Suzuki driver, who went to the ground in Qatar while he was in the leading group and achieved his first podium in Argentina, spoke exclusively to motogp.com about his chances and his future with Suzuki.

“The offer we have is irrevocable”

Everything indicates that Alex Rins will continue to improve as a MotoGP rider at Suzuki. “We have been talking about the renovation and the truth is that everything has gone in a natural and very easy way . The offer we have is irrevocable. There will be news very soon. ” In this way, the Suzuki driver made it very clear that he will continue in Suzuki.

Unlike 2017, this season has been able to make good pre-season tests and the injuries have respected them. “Fortunately I had a normal preseason, without injuries or setbacks , so I was able to train and fulfill the preset work program. This has undoubtedly helped me a lot to be able to ride the bike the way I want and also to comply with the demanding work plan we have had in winter training, in order to test everything that Suzuki had prepared and build a bike to my liking ”

In the face of grid situations like the one in Argentina, Rins assures that it is different. “The truth is that it was very exciting. Suddenly the mess was mounted . In the team they were giving me information and we were following the correct passes. Once I was back on the grid I was reassured and I was able to make a good start . “

“Many things are learned when they are in the head”

Alex Rins not only achieved his first MotoGP podium, he was also leading the race. “You learn a lot of things when you’re with the drivers in the lead . In addition, I have been able to see three of the factories, the Ducati de Jack, the Honda de Cal and the Yamaha de Zarco. We have compiled very interesting information that will surely help us a lot for the next races “.

The Spaniard knows his current situation, and the victory is a scale that the Suzuki team lacks. “At first I saw that we could go faster, but I could not overtake Jack, so I thought to stay behind and he would take us , but seeing that the pace could be faster I tried to pass it. When I got it, I went long in a braking, the track was very delicate because you had to be very precise with the lines, because if you left the lane the wet part was very dangerous. But the truth is that I enjoyed it very much during each round “.

However, he does not rule out that he can win this season. “Winning a race is not a dream, it is a goal , I do not know when it will come, this month, this year or next, but it is clear that we have the potential to do well and we are working hard to win.”

“The goal is to be able to face in all conditions”

For Rins, the primordial this season is to add points and be as high as possible in each race. “Be consistent, be regular and be in the front positions in each race . Surely circuits will come where we have more problems and others that benefit you more, but the goal is to be able to face in all conditions. “

He knows that Suzuki is a team that is growing every year, and that’s why Rins wants to stay with the Japanese team. “The project that was presented to me when I was in Moto2 ™ I fell in love with from the first moment , then I came to the team and when you know and work it is like everything is reconfirmed. I am very happy with the work they are doing in the factory, in the team, with the way they treat me, and I am convinced that with this bike, working hard as we are doing so far, you can do very important things ” .

“If we can fight for a championship? First we have to win races with some assiduity and then think about the championship , but if I did not think it could be done, I would not have chosen Suzuki to make the jump to MotoGP ™.”

Also his opinion on the incidents that occurred in Argentina. “Honestly, and without anyone getting angry, I think that in Argentina we saw a great show in the leading group, Jack, Cal and Johann did a great race , we exchanged positions, we were skidding, the track was super complicated. I would like the fans of this sport to stay with that, with the fight that there was for the victory and with the effort that we put on each one of us who were on track “.