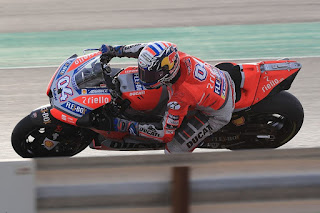 Speedcorner.net – Although Dovizioso did not top of any of the nine days of pre-season testing, his long run pace in the final pre-season test at the Losail track has marked him out as one of the main contenders ahead of the curtain raiser on March 18.

Reigning champion Marc Marquez estimated Dovizioso to be “six or seven tenths” faster after the second day of Qatar testing, expressing concern at the apparent ease with which his rival was able to set competitive laptimes.

“I’m glad so many people think that, and I’m very happy with how the test went,” said Dovizioso when asked about his perceived status as Qatar favourite.

“I knew we would be strong, but it went better than expected.

“All three days, in slightly different conditions, the times came easily, which is something that doesn’t happen often.

“We are certainly helped by the bike, which works well on this track and this year even a bit more, so we are more competitive than last year.”

Among the things tested by Dovizioso over the winter were a new type of chassis and an updated aerodynamic fairing, which made its debut in the second test in Thailand.

The Italian said a choice on the chassis to be used for the Qatar race has still not been made, but he believes it won’t make a big difference to his prospects either way.

“We tried everything we had to try and this is not always the case because problems can happen and the tyres are limited.

“We have quite a clear idea, especially on the fairing. We have more doubts on the chassis, but I can be quite fast with both [types]. We will make a choice before the first race.”
Source/Autosport