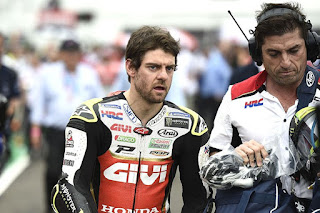 SPEEDCORNER.NET – Cal Crutchlow celebrated in Argentina his third MotoGP triumph and the 750th GP victory for manufacturer Honda. Now the World Cup leader spoke about the strengths of the Honda and the title fight 2018.

The victory in Argentina and the lead in the overall MotoGP classification after two races. Cal Crutchlow and the LCR Honda team could not have had a better start to the 2018 MotoGP season. With 38 points and three points ahead of Andrea Dovizioso, Crutchlow holds the championship lead before the Austin GP. With “motogp.com” he spoke now about the strengths of the Honda and the title fight 2018.
The biggest improvement of the RC213V for 2018 was the engine?

It is more difficult for manufacturers who do not get concessions because the engine development is frozen before the season starts. The engines can then no longer be modified [unlike KTM, Suzuki or Aprilia]. So you have to set the right priorities. The feeling the machine conveys has remained similar, but we have more power. But that’s not always a solution, because you have to be able to control the power with the electronics and the right wrist. But rather you reduce excess power, as to have too little available.
An LCR Honda rider was victorious in Argentina, a Tech3 Yamaha and a Pramac Ducati were in pole position in Qatar and Argentina. Can a pilot from a customer team win the world title?

That is a difficult question. But if I did not believe that I and the team could do that, then there would be no reason to compete. It is very, very difficult and the probability is low. The factories have much more resources, so a customer team would have to accomplish something very special to accomplish that. Since I have a direct contract with the factory, my support from Honda is excellent. But there are still many races to be won.

A customer team has about 30 members, a factory team 90. We have to wait for the manufacturers to start supplying the factory teams with new material at the European races. Then the gap can increase. I am happy with my package and also competitive with it. In addition, I am confident that I can become even stronger.

I know that Dorna and Carmelo Ezpeleta have done a great job to create a series where riders from customer teams have a great chance of being competitive. I think the MotoGP World Championship is the best sport in the world right now. The show is very exciting in the classes Moto3, Moto2 and MotoGP.
Will the 2018 season bring one of the toughest championship fights in MotoGP history?

I know how difficult it is to win MotoGP races. In Austin, I will soon see how difficult it is to lead the World Cup. I have not experienced that since 2009 in the Supersport World Cup. I have no illusions about how complicated the season will be. It’s the longest season in history and the competition is incredibly strong. Even if I do not have a good day, I still have to score many points if I still want to be in a strong position at the season finale in Valencia. You also have to accept setbacks and react as calmly as possible, because this title fight will be the hardest of all times. In this season, ten drivers have the chance of a podium finish in each race.