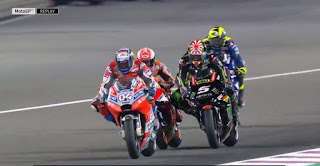 Speedcorner.net – Andrea Dovizioso was runner-up last season, and he started the season with better results after successfully defeating Marc Marquz in the last lap of MotoGP Losail Qatar.

With these results he managed to put ‘Desmodovi’ in first place in the standings this season. And he is also the second driver after Casey Stoner who won the Qatar Circuit.

Stastically, the drivers who won the race in Qatar had a 50% chance of winning the championship. Like Stoner who won the first time with Ducati at the Qatar GP in the 2007 season, and became championship in the same year.

He has his compatriot Loris Capirossi and Andrea Iannone who also once brought deliver for Ducati. But only with Dovizioso Ducati made it back to the top after a couple of difficult seasons, and he was the only Ducati rider after Casey Stoner was able to fight for the title against Marc Marquez.

The trips of Dovizioso and Stoner are different, but both managed to win the race in Qatar by fighting the most dominant riders of their respective era, Stoner against Valentino Rossi and Dovizioso against Marc Marquez. So whether Dovizioso to able won his first title this season as well as a second title for Ducati?