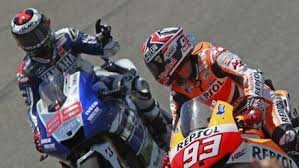 SPEEDCORNER.NET – The incident involving Valentino Rossi and Marc Marquez last week is still a controversy. Many people talk about it with their own opinions.

Not only observers, but MotoGP racers also participate speak. Like Jorge Lorenzo. Lorenzo not only once commented on the Termas Clash.

Lorenzo also describes that he is also just like Marquez, and says about his past that he’s also a crazy racer. But Lorenzo has learned from experience in order to control himself during the race.

“I myself am an aggressive and crazy rider, especially when I debut in my first year in the 250cc class (I’m very aggressive and when I see the gap I always try to get in)”.

Lorenzo tried to compare himself with Marquez, given that his courage and aggressiveness were his strong points: “In the Japanese Grand Prix I struggled for second place with Dani Pedrosa and Alex De Angelis and I wanted to finish second whatever happened, I touched Dani twice in the corner. different, I tried to take both, but I dropped De Angelis, Race Direction punished me, and I have to pass the next race, since then I learned not to go crazy “.