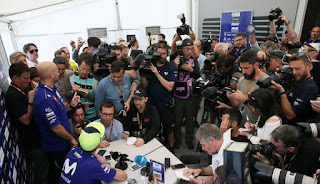 SPEEDCORNER.NET – Before the first free practice of MotoGP Austin, America, the MotoGP riders met at Austin Safety Commission, which is where Carmelo Ezpeleta was present to deal with the problem.

But unfortunately, the meeting was not attended by Race Direction. Should be in a messy situation like this Race Direction should come. No news and no explanation why they did not come.

The meeting lasted for 90 minutes. Within 90 minutes they talked about what happened in Argentina two weeks ago. Such as the incidents between Marc Marquez and Valentino Rossi, Danilo Petrucci and Aleix Espargaro, and the confrontation between racers in social media.

According to Italian media, La Gazzetta, there is a verbal confrontation between Marc Marquez and Valentino Rossi.

“I learned from you,” Marquez said sharply after he got a lot of criticism after Argentina.

Rossi immediately replied “what do you want to compare between you and me?” he replied.
“I’ve dropped four riders in 20 years, while you’re five riders in a race?” Rossi sneered.