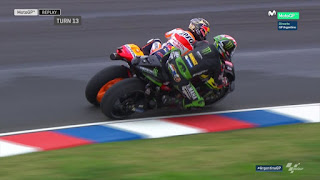 Speedcorner.net – It was a black Argentinian GP for Dani Pedrosa , who left the scene following a contact with Johann Zarco. The fall caused the intra-articular fracture of the right radio to the Spaniard, so much so that he was forced to undergo surgery at the Dexeus hospital in Barcelona. On 10 April, a titanium nail was applied to the Honda rider to help reduce and fix the fracture suffered by the right radio.

Despite the successful completion of the operation, there was no shortage of questions regarding the 26th participation in the Grand Prix of the Americas. The news of the day is that Dani will be present on the track in Austin with the aim of getting on the Honda and participating in the round of stars and stripes . To do so, however, will have to get the approval by doctors on Thursday.

There is confidence in the face of the Iberian: ” After the operation I started feeling better – said the pilot – I did several exercises to get more mobility and reduce inflammation. I’m recovering muscle tone and this allows me to see progress “.

However, Pedrosa prefers not to lose weight: “It’s difficult to know our real possibilities – he warned – Austin is a difficult track and until I’m back on my bike I will not really know my situation”. But he does not want to give up: ” The only clear thing right now is that it is worth going to the United States and trying to run. The support of the many fans represents my strength and I am grateful to all of them “.