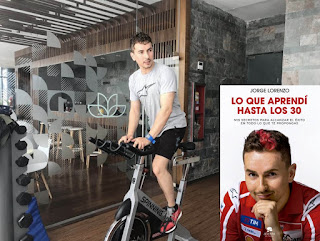 SPEEDCORNER.NET – At the margins of the presentation of his latest book “Lo que aprendì hasta los 30” (“What I understood in these 30 years”), Jorge Lorenzo also spoke (little) of what happened in the GP of Argentina and his situation in Ducati .

“I only came to talk about my book – he said – The controversy between Marquez and Rossi is just not about me . It’s a question between them. These are things that happen in the race , there are frictions, and there is always someone who does not get along with one another. But I am convinced that what happened in Argentina will soon be just a memory and an anecdote “.

A little ‘more’ Porfuera ‘has let slip on his difficult apprenticeship with the Ducati.

“Being able to pilot it is an obsession and it is precisely for this reason that I changed my preparation, modified the diet and increased the number of training hours – he recalled – At the moment these efforts are not repaying me with the results, but not I have doubts that I will soon be able to win. It’s just a matter of time . The goal is to win a race and, if possible, the world championship. This year started badly but the championship is long and as we have seen everything is possible in MotoGP “.

Not even the inevitable question about hiring him embarrassed him.

“ I know that at present my value is lower than that of two years ago, but the world knows what Lorenzo is capable of when he drives a motorcycle. After all, I was the only one able to win a World Cup in the Marc Marquez era. “

Jorge is back also on the statements made to Movistar on his partner, Andrea Dovizioso.
“In reality nothing has changed between us. I said what I said in that interview by answering a question that had meant for what happened previously. To understand the answer we need to know what had happened before “.