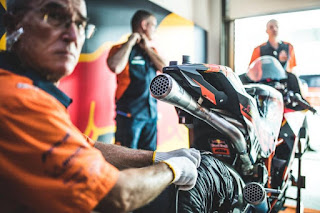 Speedcorner.net – As we know that starting next year the Tech3 team will leave Yamaha and join the KTM.

There are many reasons why Tech3 left Yamaha who have for years worked together. One of them is because as long as the Yamaha Tech3 never get a factory bike as said by a spokesman Marc VDS.

But the speculation was denied by Yamaha Boss, Lin Jarvis. He denied the statement and said that Tech3 left Yamaha not because of the support factor from the manufacturer, but because Herve Poncharal (Boss Tech3) can not refuse what KTM offers.

So starting next season Tech3 will use KTM RC16, which means there will be four RC16 bikes on the MotoGP track.

With increasing bikes to be used next season, KTM plans to find five new engineers to expand the development of its racing department.