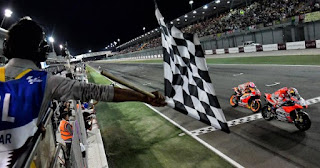 Speedcorner.net – The weekend was very satisfying for Ducati rider Andrea Dovizioso. After a bad start but he managed to win from Johan Zarco and Marc Marquez.

At the start of the race he had to fight from the back sequence, away from the position of Johan Zarco who had led for several rounds. He also almost hit Alex Rins, but he managed to take the Rins position in a careful way so that the tire hold his hold.

“I am very happy with this victory I started the race with a situation that is not too good, when behind Rins I almost hit it, even I have to close the gas to avoid from the bike, but in the end I managed to pass it carefully so as not to lose too much grip “. Said Dovizioso.

Do not stop there, Dovi also had to fight all out to poke into the front position. The moment after Zarco passes, Dovi also struggles away from Marquez and Rossi.

“Toward the end, after passing Zarco, I try to get away from Marquez and Rossi but I do not have much of a handle”

“At the last corner I tried to be very careful because I knew Marquez would try to get past me, and in fact that’s how it happened.When he tried to get past me at the last corner, he closed my racing line very tightly, even closer than in Austria and Japan , but I got through it by speeding over the edge of the road and then I was exploiting my Desmosedici powers to stay in front again, once again a great satisfaction! “Close Dovizioso.