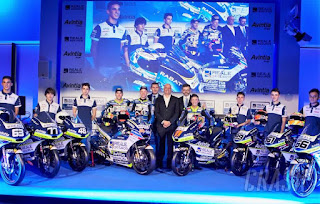 Speedcorner.net – The all-new Reale Avintia line-up of Tito Rabat and Xavier Simeon have unveiled their 2018 MotoGP colours in Madrid.

Former Moto2 world champion Rabat, who will race a GP17 Ducati, joins the team after spending two seasons on a Marc VDS Honda.

Rabat had been a competitive 12th and 11th quickest, receptively, at the opening tests in Malaysia and Thailand, but slipped to 19th in Qatar.

“The presentation has gone well and the new livery of the bike is amazing,” Rabat said. “We are ready to start the World Championship in Qatar next week and I can’t wait to start the first free practice sessions. In this team I’m at home and from the first moment I really had good feelings riding my Ducati GP17. Now we just have to wait for the red light to go out in Qatar”.

Simeon will become Belgium’s first premier-class rider since Didier de Radigues in 1991. The rookie, who has a two-year contract, will race the GP16 Ducati this season and has been ranked 22nd, 24th and 23rd in the tests.

“The preseason has gone very well and I have been able to learn many things about MotoGP thanks to the team,” Simeon said. “The new bike is beautiful and the team launch has been great. In a few days we will be in Qatar under the floodlights and then the serious part will begin. The important thing is that we are ready to start and give a lot of gas.”

Livio Loi, who will be run by a new Reale Avintia Academy team in Moto3, plus Avintia’s CEV and European Talent Cup riders were also present for the launch.

“I’m very happy with how the winter testing has gone,” Loi said. “The weather has not accompanied us as much as we would liked but, I think we arrived ready to Qatar. The team is very professional and I have adapted quite quickly to the KTM. In a few days we will really see where we are and how far we can go”.