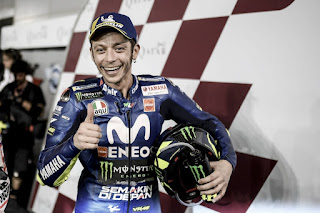 Speedcorner.net – Almost a week after the second date of the season at the Autodromo de Termas in Rio Hondo , Argentina , Valentino Rossi opens up to the Italian colleagues of the Gazzetta dello Sport about his renewal and about what happened last year and the differences that There may be with this one that has just started sporting.

Its renewal with the Japanese brand until 2020 has opened the debate of whether it should continue or not, but the Italian is more than happy with his decision. ” This gives me a lot of motivation and recharges me ,” he told the compatriot newspaper. “I would like to finish my race by winning or fighting for the podium, and in the last few years I have been runner-up three times and, therefore, the first thing is to try to be competitive “, said ” Il Dottore “, confident that he still has strength and desire to continue giving war to the riders of the MotoGP grid for almost three more years.

It is true that motorcycling is demanding , but compared to sports where physical performance prevails above all, the limit is really set by the driver. “Our sport is not athletics, cycling or football, what you lose over the years is mainly motivation, but also physically you lose a bit of performance and you have to train more”, deciding the issue of age and comparative with an increasingly strong grill and full of riders that barely exceed thirty years. “Hamilton in Formula 1, or we in motorcycles, from this point of view we are lucky, because until age 40, if you want, you can physically be there “.

Rossi has already shown that he will not leave until he decides: “In my opinion, it is easier to say that one is finished, instead of recognizing that he has the balls to keep trying .” There are opinions that are based on a stubbornness of the Italian to continue in the world that has given him so many joys, and not so much joy, for so many years. “There are two types of people: those who appreciate if someone is great and enjoy it, and the envious, who transfer their own inferiority in others, in Italy it is fashionable to do so”, referring to the fact that Gigi Buffon , goalkeeper of the Juventus , who returned to the Italian national team after being eliminated from the World Cup in Russia for previous friendlies, also received this type of criticism.

He also commented on the problems he went through with Yamaha last season with a bike that ended up being a complete disaster and that left him out of the Dovizioso-Marquez fight . “In 2017 we lost some time because it was the wrong bike, what Ducati and Honda have done better , in my opinion, is to have worked longer, with more money and more people in the electronic part, that ‘s where we suffer,” which he said a few months ago during the preseason. “We need people to try to get the most out of these areas, which is where Yamaha could have gone wrong, we will go to the tracks where we will be inferior and we will have to work hard, but I hope and believe that with the 2018 bike where we suffer, we will do less . “

Another season has begun, in which the question about whether or not the desired tenth title will survive will remain in the air. ” It would be positive, I would like it and we do not lack anything, ” commented the Italian. “Last year we lost the good of our motorcycle and we only had the defects without the good things, now we still have defects, but we have recovered the positive things ,” he clarified . “In 2017, Maverick and I finished third and fifth, fighting until the middle of the season , we can do more, we are stronger and at least we can play it “, making it clear that you can never leave Yamaha out of the betting.