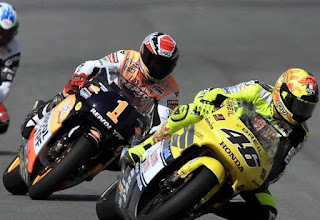 Speedcorner.net – Valentino Rossi started the race in the premier class along with the Nastro Azzuro team using the Honda NSR500 bike with a capacity of 500cc engine. Having gone up from the 250cc class of course it’s not an easy thing to adapt quickly. His first debut was a race at the African Grand Prix.

In the first race, Honda’s young racer became a threat for the five leading riders. Rossi position had dropped to position 13 on the first lap. Then he thought and set the strategy for how to make the fastest lap, and on fifth lap Valentino Rossi’s was already sixth, right in front of defending champion Alex Criville.

On the eleventh lap Rossi had thought that he would not be able to approach the five leading groups.

“My first race in South Africa was with the 500cc class,” Rossi recalled.

“I made a bad start but after I made the fastest lap with the Honda 500, I could slowly get closer to the fore”

Even Rossi could think why they are so slow because it is easy to approach, but it turns out what he think is wrong, actually they also have a good speed, but they do not push because they have to keep the rhythm of racing.

“When I arrived at the front group, I thought, ‘why are they so slow?’and then I fell down’.”

“At that time I also understood that they actually have a good speed and maybe I’m too fast (impose).”

Rossi was a”For me, the main difficulty with the 500cc is to manage the power and acceleration of the bike, because it is different from 250cc,” explained Rossi. “And also must be able to understand the front limit, because the bike is much heavier.”.lso eliminated in the next round at Sepang, but in the end he could finish the race in the next round in Japan

“It’s hard to understand how much you can maximize.” Rossi recalls.

But Rossi immediately reversed the situation: His first podium came in Jerez (round four) and his first win at Donington Park (round nine).