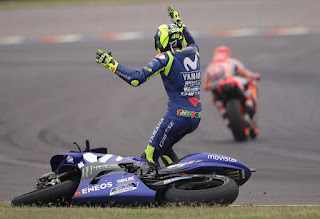 SPEEDCORNER.NET – Previously Dorna had said that he would call Valentino Rossi and Marc Marquez in Austin to talk about what happened in Argentina last week, but until now the call was not there.

Therefore Rossi will do his own press conference. Valentino Rossi will speak at 2:30 Thursday morning, two hours after the official MotoGP press conference to be attended by Cal Crutchlow, Andrea Dovizioso, Johann Zarco, Maverick Viñale, Jack Miller and Alex Rins.

Actually this is something usual, but what makes it amazing is Valentino Rossi’s press conference will be broadcast live on the official MotoGP website. Obviously this is not unusual as it never happened before, last happening in Sepang 2015 in the previous clash between Valentino Rossi and Marc Marquez.

Perhaps everyone will ask what Valentino Rossi will say in the press, will he say that he feels guilty about what he said after the accident in Argentina, which is also overstated by the president of FIM, Ippolito?

Or maybe it will say about another understanding of what has happened? Not just Rossi, it seems Marc Marquez will also hold a press before the official MotoGP press. Let’s wait what they say.