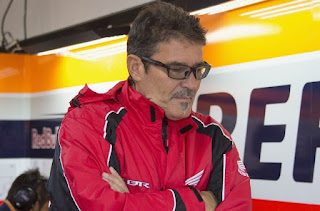 Speedcorner.net – Marc Marquez has confirmed his contract with Honda, and will run until 2020. While his current teammate, Dani Pedrosa contract is still gray.

Currently the seat next to Marquez is still empty, a lot of racer candidates who have good qualities such as Johan Zarco and Andrea Dovizioso. Dovizioso had raced with Honda and won.

Communications manager of Honda, Carlo Fiorani said that the team will not be too hasty in making a decision, because after all Dani Pedrosa has contributed to Honda, even has won the race as much as 54 times.

“We have not started talking to anyone yet I do not see anything strange, and no one is in a hurry to take another driver, because ultimately the final decision is up to Alberto Puig (team manager, red) and Tetsuhira Kuwata (HRC director , red). ” Said Carlo

“Surely we will first talk to Dani for various reasons. He won many races, 54 GP with Honda, like Doohan. Then he is the perfect team racer: in last year’s final GP, in Valencia, he did exactly what he had to do. So he has priority “.

When asked by the Italian media, what if Pedrosa no longer wants to be with Honda? Maybe he was interested in KTM or with others?

“Then you have to choose between two ways: First, take other experienced racers and winning racers, like Dovizioso or maybe Zarco, second, take the young rider from Moto2” says Carlo Fiorani.