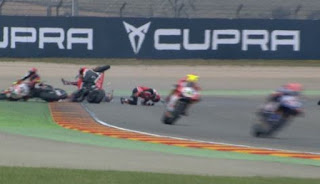 SPEEDCORNER.NET – Unleashed suddenly by his Fireblade, Leon Camier was hit by the innocent Jordi Torres, in a tussle with the Englishman of the Red Bull team and with Lorenzo Savadori on the RSV4.

The first shot Leon gave him on the asphalt of Aragon, then he received an even worse from the wheels of the MV Agusta, with Torres unable to change trajectory; the carambola also fell Savadori, who hit the Honda already on the ground and then fall in turn.

If Jordi and Lorenzo got away with a few scratches and a good scare each, Leon needed rescuers’ intervention : the number 2, left on the ground, was moving but did not come back on his feet.

Absolutely necessary the red flag: in addition to Leon on the ground, with the rescuers who cared for him, the track presented many pieces and debris of the three destroyed motorcycles; the most battered was the F4 of the Spaniard, who did not take part in the second start.

Loaded on the ambulance of the circuit, Camier was then brought initially to the medical center. After a further check, the English rider was transferred to the hospital closest to the Motorland, in the city of Alcaniz.

When the worst and most stable danger has been averted, the Honda driver is now undergoing further medical intervention and further investigation.