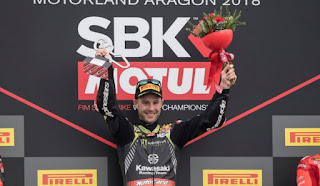 SPEEDCORNER.NET – They touch the bike, penalize it by cutting off engine revolutions, overturning the technical regulations and the starting lineup.

We also miss that the castrassero, but we bet that Johnny Rea would remain the usual and “badass” pilot, winning and determined more than ever ?! Today the three-time Champion has – still – the part of the cannibal, triumphing in race 1, bringing to 56 successes his overall score in the derivatives.

Fogarty is getting closer and closer, even if Johnny thinks to do as usual, win race after race, and then make the final counts. Aragon’s Saturday went smoothly and he admits it: ” the track conditions found today, proved to be perfect for us – declares the number 1 – as we managed to find a good set-up for our Ninja ZX10RR, also making the right choice of tires ” .

The red flag exposed after the incident by Camier, did not distract Rea, who found his verdona improved and grew after all the regulatory cuts: ” I knew that here we would be strong – unveils – and, from the beginning, I found the speed and the ideal rhythm. I was aware that, especially at the end of the race, we could have been constantly fast. When Fores passed me, I tried to understand where I was stronger, understanding how to improve. In the average corners of fold the Kawasaki was faster and in the corners I was more fluent. Now I’m really happy with my bike ” .

Tom Sykes has also struggled today. The English did not run badly, but the comparison with Rea is, for now, unattainable. Tom is a strong rider, he knows how to react, but Aragon has encountered some problems: “I ‘m disappointed, it was a strange race – exclaims Sykes – we are working a lot on the bike, but we suffer in acceleration and we do not have enough speed out of curve and even when we are in the wake of other drivers, we gain speed only in the last 50 or 100 meters “.

The championship is still long , Sykes knows that he can count on the skill of the Provec team technicians, trying to change his tactics: ” today Rea was very good – recognizes Tom – and he did a good job. Now I have understood that I will have to try to lead every race in the head, because when I am in the middle of the group, I am always overcome with the trail “.