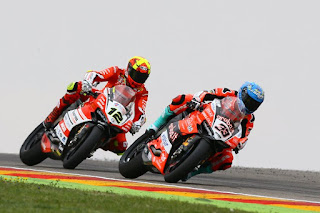 SPEEDCORNER.NET – Fastest Free Practice and Super Pole Wins – Phillip Island double winner Marco Melandri was the man to win in the first race of the Superbike World Championship in Aragón. But nothing came of it.

It looked good for Marco Mleandri: In 17-lap shortened race the Ducati rider fought in the top 3 and challenged the eventual winner Jonathan Rea (Kawasaki) from everything. In the position fight against his Ducati brand colleagues pulled the 34-year-old but the short straw.

On lap 8, he lost to Barni driver Xavi Fores, and two laps from the end, Melandri lost third place on the podium to his team-mate Chaz Davies, who only started eleventh in the race (Davies snatched even 2nd place from Xavi Fores in the last lap).

6.1 seconds behind the winner, the Aruba Ducati rider crossed the finish line in fourth position. “It was difficult,” Melandri said of the first race. “At the start of the race, I had more problems, towards the end I was even faster. However, I could not overtake effectively. Whenever I wanted to overtake Fores, my bike got stuck and I could not finish the maneuver successfully. “

Melandri also attributes the lost podium to chassis problems, which have already massively restricted him in Thailand. “In the penultimate lap, my bike rocked out of the last strong corner, so I had problems braking the first corner. Our potential is definitely higher than place 4. On Sunday I will come back and want to podium!